Karni Mata Temple is a Hindu temple dedicated to Karni Mata at Deshnoke, 30 km from Bikaner, in Rajasthan, India. It is also known as the Temple of Rats.

The temple is famous for the approximately 25,000 black rats that live, and are revered, in the temple. These holy rats are called kabbas, and many people travel great distances to pay their respects. The temple draws visitors from across the country for blessings, as well as curious tourists from around the world.

Legend has it that Laxman, son of Karni mata, drowned in a pond in Kapil Sarovar in Kolayat Tehsil while he was attempting to drink from it. Karni Mata implored Yama, the god of death, to revive him. First refusing, Yama eventually relented, permitting Laxman and all of Karni Mata’s male children to be reincarnated as rats. 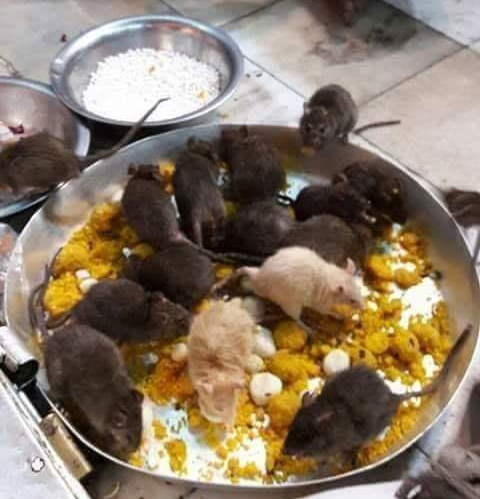 Eating food that has been nibbled on by the rats is considered to be a “high honour”. If one of them is killed, it must be replaced with another one made of solid silver.

The building was completed in its current form in the early 20th century in the late Mughal style by Maharaja Ganga Singh of Bikaner.

In front of the temple is a beautiful marble facade, which has solid silver doors built by Maharaja Ganga Singh. Across the doorway are more silver doors with panels depicting the various legends of the Goddess. The image of the Goddess is enshrined in the inner sanctum.

Out of all of the thousands of rats in the temple, there are a few white rats, which are considered to be especially holy. They are believed to be the manifestations of Karni Mata herself and her four sons. Sighting them is a special blessing and visitors put in extensive efforts to bring them forth, offering prasad, a sweet holy food.

The temple is opened to the public early in the morning at 04:00. Charan priests perform Mangla-Ki-Aarti and offer bhog (special food) in worship. Devotees make offerings to the rats, which roam about the temple in large numbers and are considered auspicious. There are two kinds of offerings made: the ‘dwar-bhent’ is attributed to the priests and the workers, while the ‘kalash-bhent’ is utilised for the temple maintenance and development.

Karni Mata Fair is held twice a year at Deshnok: